Home Albums Waiting For The Day 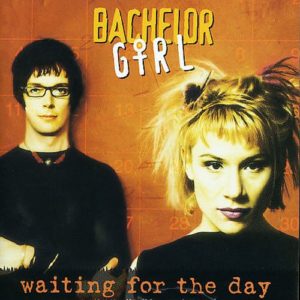 The first album by Australian band Bachelor Girl, released in Australia through Gotham Records on 9 November 1998 (see 1998 in music). The album charted in the top twenty on the Australian ARIA Albums Chart and is the band’s highest selling album. The album yielded five singles; “Buses and Trains”, “Treat Me Good”, “Lucky Me”, “Blown Away” and “Permission to Shine”.

The album was recorded in James Roche’s living room, and went on to win the ARIA award “Producer Of The Year” in 1998.

In the inner city café, there are people at every table. Over by the window a sad eyed woman stares in silence at a restless man who can’t bring himself to look at her; a young girl crams chocolate cake into her mouth and laughs with a friend over the exhilarating and dangerous adventure that is her life. At a corner table, a tired woman weeps quietly, unseen; another woman leans across, asking over and over the same quiet desperate question: ‘Why? Just tell me why – ” A nonchalant man in a leather jacket is stopped in the doorway by a woman who begins to scream at him. Perched up on stools there are a man and a woman with their hands edging closer together on the counter top, smiling, self-conscious, too scared to look at one another.

James Roche and Tania Doko have a working partnership that has, in James’ words, “weathered the droughts & weathered the storms. Our relationship is very tight. We have all the elements of a good marriage – except the sex –” Unlike certain doomed rock couples of the past, BACHELOR GIRL is built on the firmer foundations of strong friendship and total dedication to their music. The most striking result of this dedication thus far has been the stunning success of their first single, “Bus and Trains”, their platinum selling Top 5 debut, with the follow up “Treat Me Good” certain to make an equivalent impact.

The duo met in 1992 when Tania was just eighteen and James an already experienced musician. The marriage of his keyboard skills and rock influences with a love of R&B and earthy, soulful voice, produces a fruitful songwriting partnership that has blossomed over the years with a wealth of irresistible melodies. With the release of their debut album “Waiting For The Day” James and Tania’s faith in their solid creative vision has been realised.

“We love songs that have several layers of meaning,” says James. BACHELOR GIRL tell stories; they might be oblique, smart, funny or acutely painful, or all of the above. Their songwriting has been informed by their mutual interest in psychology, comparative religion, and what James terms “relationship mechanics.” This intensely personal story telling is one reason for the emotional impact of BACHELOR GIRL’s songs. “if you sing, ‘Oh, I love your ruby red lips’, there’s nowhere to go after that…but if you sing, ‘All my stuff is still at your place’, then you’re already right in the middle of something….”

Many of the same themes resurface over the course of the album. “People aren’t always aware of their emotions, or what’s good for them, or they’re on the scared side,” says James. Fear of intimacy, a resistance to love, the need for “that little extra push” as Tania puts it, are common concerns, just because they are common human emotions. Indeed most of the songs, though expressed through different personas and scenarios, are grounded in personal experience, sometimes their own. As Tania says, “in some ways, we’ve taken all our lives to write this album!”

Tania, the daughter of an Italian mother and an Albanian father, was brought up with a passionate interest in the personal and political. She spent four years at university studying criminology & psychology, although she says what she enjoyed most are the interesting people she met and the rambling discussions in the cafeteria. James, who perhaps inherited his obvious love of language and an ability to deeply touch an audience, is the son of an English teacher mother and a father who is a minister (at this point Tania bursts into a spontaneous rendition of “Son of a Preacher Man”, followed by hearty laughter.

The duo were involved with every aspect of the album’s creation. They did virtually everything themselves, not just writing the songs, but performing everything (except drums and guitar). The album was produced with painstaking care by both of them & almost entirely mixed by James (with the exception of three tracks mixed by Steve MacMillan in Los Angeles). This remarkably talented pair have amply repaid Gotham’s faith in their ability to deliver a superb debut. The album is “Waiting For the Day”, but the day of BACHELOR GIRL has well and truly arrived.

The Top 5 platinum selling debut single, this song explores the catastrophic yet irresistible nature of falling violently in love. “Buses and Trains” is written from the viewpoint of a young woman who is hurting herself into the world, yet is still innocent enough to believe that someone should have prepared her for love’s pain and its addictive excitement. Unconventional as it is, the road accident metaphor is weirdly, almost erotically appropriate to that delicious, dangerous process of losing control.

James’ favourite track on the album, “Gotta Let You Go” is a bittersweet tribute to a relationship that has simply “run out of puff,” and the need to accept that even though there may still be fondness and emotional attachment between two people, sometimes the only way forward is to part. With its “courageous chorus” that drops down in intensity from the verses, and its cycle of ascending chords, this is a song that climbs into your head and manages to be uplifting even in its melancholy.

The second single, this is the “song with the social conscience,” and an example of a very specific story that can have resonance for almost everybody. Written in the voice of a woman struggling with a partner who hurts her in all the small and serious ways that people can, she is quietly determined to win the respect and dignity she deserves. A protest against mistreatment in relationships in all its forms, from physical and emotional abuse to the crippling fear of jealousy, this is not an angry song, but no less powerful for that.

This is a song that, unusually for the duo, grew from an idea rather than from a splinter of melody or lyric, the idea of a catalogue of signs that could indicate that a casual relationship has grown into something that might just, perhaps, maybe, tentatively, scarily, be called love…swapping keys, drinking from each other’s coffee cups, spending days and nights together. James calls this a “post-modern song; love isn’t that fashionable any more.” But as Tania points out, “If you’re sharing someone’s toothbrush, then I think it means you’re into them, right?”

WAITING FOR THE DAY

The scenario for this song is a painfully clear one: the singer has just unexpectedly run into an ex, at a party or in a bar. It’s not long enough after an acrimonious breakup for her to control her feelings, and she lets fly, furious with him for acting so cool, furious with herself for being still mired in a pain that refuses to be dulled. James says, “There’s a kind of circular outro to this track, I don’t know that we intended it that way, but it’s like her sense of frustration, getting stuck in the same place – the day will come when she can see him without opening up that wound again, but you can’t hurry it.”

This is the most straightforward let’s-get-together song on the album, a girl and boy “dancing on the edges of having a relationship,” as Tania puts it, and the girl appealing to the boy to give it just that little extra push forward. Many of Bachelor Girl’s songs explore resistance to love, and this one, co-written with Nashville-based songwriter Randy Goodrum, is no exception. But untypically, it is more stripped back musically than usual, with a raw and basic drum, bass and guitar riff echoing the uncomplicated entreaty of the lyrics.

We’ve had the experience of people crying at this song, and that’s tremendously moving, as a writer,” says James. Stylistically similar to the album’s other big ballad, “Waiting For The Day,” this is a song that seems to slip through the protective armour of both single people and those in relationships, beseeching for trust, with Tania projecting a raw and yearning vulnerability.

A reflective, spiritual track, featuring a Jack Jones guitar solo, “Someway, Somehow” is a song about faith that started out as a gospel song and took a left turn along the way. “It’s about having a beacon to guide you in the shadow of the night,” says James, “whatever inspires or comforts you, whether it’s religion or a relationship of God or your dream. We’ve just called it love, generically.” As Tania says, ‘Faith – we all need it.”

“When it comes to love,” says Tania bluntly, “there are no brains.” This is the only song on the album not derived ultimately from personal experience. “The only totally made-up one,” says James. “Neither of us has had to suffer this terrible situation, of being completely deceived and humiliated and done over by an absolute slime.” This song eloquently charts the utter searing pain of infidelity and the powerless agony of realising what a tool you’ve been.

A moody, eerie, masochistic song, this track is filled with pent up anger and desperation. The polar opposite of “Gotta Let You Go,” this is the plea of a woman who cannot bring herself to accept that the relationship is over and insists on torturing herself by demanding to know every unknowable reason why, no matter how painful or futile the revelations may be. The song was co-written with Australian songwriter Michael O’Rourke, and he takes credit for the biting line, ‘You said if I’d ever listened/It would be the very first time….”

A subsequent re-issue of Waiting For The Day included “Blown Away” and “Permission To Shine” – songs given to the band by legendary Arista don Clive Davis – and “Lucky Me”.
All three went on to be singles for the band